It is critical for quality control and nondestructive testing to avoid the usage of ionizing radiation (X-rays) due to its detrimental effect on biological agents. This is where Terahertz imaging technology, developed and commercialized by Terasense, is extremely useful, and there are many examples of THz imaging’s useful application in the food industry.

Instead of using X-ray machines, food manufacturers and packagers can use our terahertz food scanner to, for instance, check if a pick-and-place robotic arm has put all candy bars into the cardboard carton. Seeing through cardboard or PE packaging poses no problem to our THz imagers—individual chocolate bars can be wrapped in any material, even metal-containing foil, which is impervious to THz rays. In fact, metal foil would create even better contrast in THz images. In this picture, we can clearly see that one of the candy bars is missing.

Another good application is checking noodle packs to see if they contain a sachet with seasoning. A sachet must be placed inside every noodle pack, and whether it’s packed manually or by a machine, mistakes can be made. Our THz food scanner can gently and quickly prompt the conveyor-line operator and indicate if a sachet is missing. The dark spot in the THz image clearly indicates the presence of a sachet. Noodle containers are usually made of plastic or synthetic foam (polyfoam), which is transparent to THz waves.

Reports of insects and other foreign objects found in food are a serious cause of concern for consumers, food manufacturers, and retailers alike. Unwrapping a chocolate bar might reveal an unpleasant surprise such as an insect, pieces of metal or glass, or clots of dirt.

This may not only kill the consumer’s appetite but also cause a broken tooth or poisoning. On top of that, a producer or retailer in certain countries may end up being sued, potentially leading to million-dollar fines and lawsuits.

Specifically for food industry applications we made some tests meant to show our capability to identify extraneous objects (e.g. insects, pieces of plastics, metal, stones or soil) inside of some food products.

As the above pictures clearly show, our THz imaging systems can easily detect a common housefly through several polyethylene bags, even if total thickness of such PET coating exceeds 20 mm.

Detecting metal or plastic debris inside food packaging is just as important. These THz images show metal debris inside a chocolate bar or in a powdered substance. In the latter case, THz imaging was performed though a plastic container filled with flour.

Of course, instead of chocolate or flour it can be any other dry food.
For our THz technology to be effective, metal foil should not be used as wrapping or packaging materials. Metal is impervious to THz rays.

We receive many inquiries related to using our products in the food industry. There are certain problems that conventional approaches based on infrared, visual, and X-ray inspection methods cannot solve, and this is exactly where Terasense THz imagers show their strengths.

A very important issue in food manufacturing is the noninvasive detection of fungus, which grows in all products over time. Terasense imaging systems reveal carcinogenic Mycotoxin fungus that contaminates peanuts, corn, hazelnuts, and other grain crops and oil plants. For instance, with the aid of our THz imagers, industrial customers can detect any sign of infections such as Aspergillus flavus and Aspergillus parasiticus, which exude the extremely dangerous carcinogen Aflatoxins B1.

The figure demonstrates the capability of terahertz imaging to detect nuts infected with the Mycotoxin fungus. The THz image was taken in the transmission mode. Red color designates 100% THz transmission, green 50%, and blue 20% at the frequency of 0.1 THz. The picture clearly shows a detectable defect—the upper nut, which is infected with the fungus, produces a much darker image. 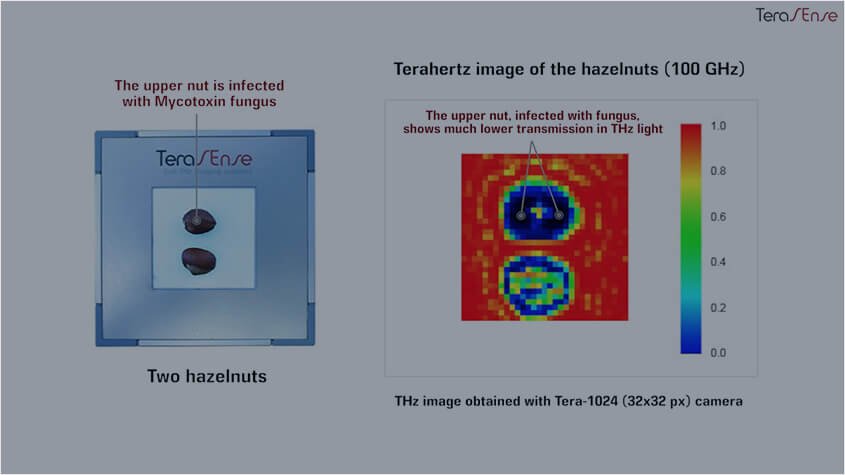