With that said, as compared to microwave radiation, the terahertz (or T-ray) frequency range enables to achieve a fairly good spatial resolution required for rendering quality imaging. T-rays are non-ionizing, able to penetrate clothing, polyethylene, polyester and other types of shrouds, covers and enclosures, made of various opaque materials, selectively absorbed by water and organic substances. These unique properties make T-rays much more attractive and informative than X-rays and near infrared radiation (NIR).

The second unique property of THz emission is its harmlessness for biological entities. As opposed to X-rays (Roentgen), terahertz waves have absolutely no ionizing radiation impact, are non-invasive and absolutely safe for humans, animals and plants. Moreover, many substances reveal their characteristics spectral lines in the far THz range (1 — 3 THz), which provides unique information about their structure and allows conducting their chemical analysis.

During the last few decades there have been a lot of speculations about terahertz technology, yet not so many really successful breakthroughs have been made. TeraSense tries to bridge the «terahertz gap» by developing a special imaging technology.

Terahertz rays (T-rays) are a unique type of electromagnetic radiation, whose great potential is yet to be further developed by human civilization. Many of the existing T-rays devices use single-pixel detectors, which require ultra-low temperatures of liquid helium. Such T-ray instruments are typically very large, difficult to use, intended for specific narrow applications, and prohibitively expensive.

Many global corporations and research institutions have already invested billions of dollars in creating sources and detectors of T-rays. Many of them are still a long way off from creating inexpensive and easy-to-manufacture devices, which would be compact, convenient and applicable for routine use, while Terasense «has been there, done that»! 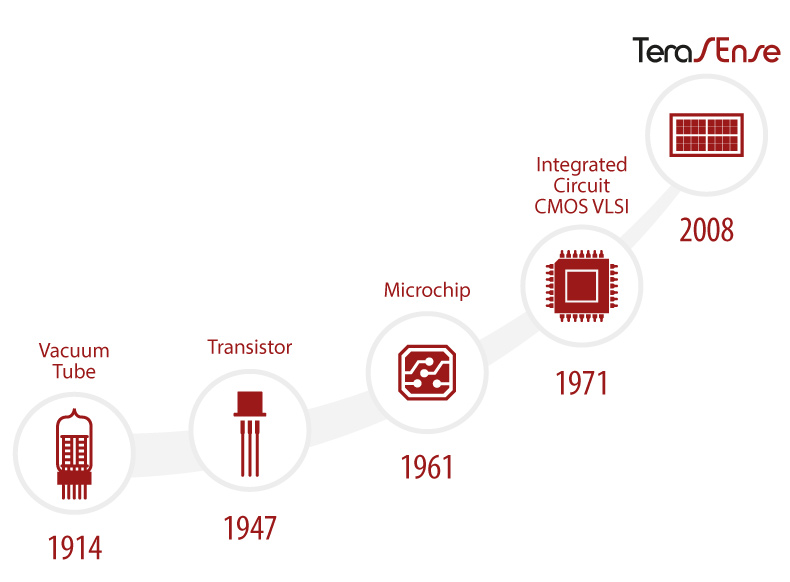 Presently, there are five key fields that are getting transpired as feasible applications for THz imaging systems.

Security systems for people screening and luggage scanning. Here the emphasis is primarily made on the fact that unlike X-ray, THz radiation is not detrimental to human body. THz scanners allow remote detection of metallic, plastic, ceramic and other objects concealed under clothes — at a distance of several meters.

THz tomography in medicine allows conducting analysis of the upper layers of a human body — skin, vessels, joints and muscles. There are known successful applications of THz tomography for detecting skin and breast cancers at early stages. Most interesting is also the capability of visualizing current conditions of wounds under gypsum/bandage layers.

The scientific applications of THz radiation include spectroscopy of long-wavelength lattice vibrations of crystals, bending vibrations of molecules. Frequencies of soft modes in ferroelectric materials and frequencies matching the energy of apertures in superconductors are also «residing» within the THz range. Terahertz frequency range is convenient for creation and study of meta-materials and plasmonic effects.

There are two application fields that stand out from the rest and can already boast to have employed terahertz systems in world practice. The first field includes high speed conveyor Thz imaging systems for postal office screening (envelopes, packages, parcels, etc.)

The other area includes identification of chemical substances based on their characteristic features of their terahertz spectrum acquired by portable Raman spectrometers.