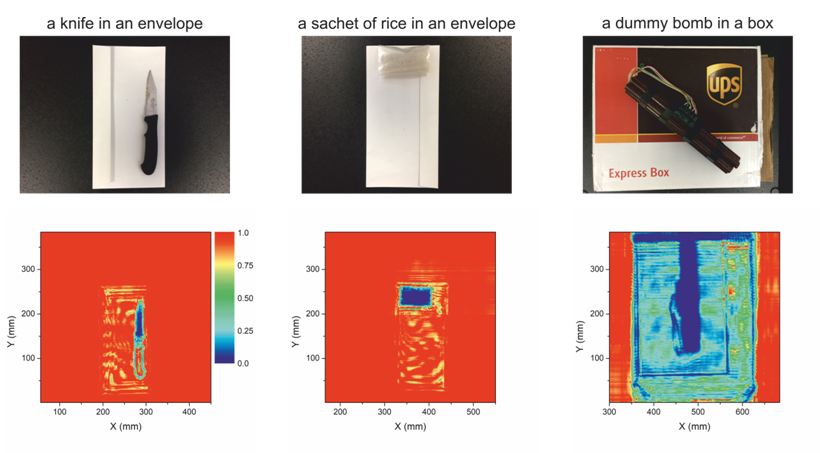 About four years ago TERASENSE released its first high speed linear scanner system at 100 GHz, which still holds the palm as our flagship product. As the system was designed primarily for industrial applications associated with non-destructive testing and quality control, it can support imaging speed up to 15m/sec.  The system can detect hidden defects or objects. The pictures here show hos our scanner handles detection of a knife, a sachet of powder or even a bomb hidden inside a package without disturbing its integrity that is important for security applications.  All our terahertz sensor arrays employs plasmonic detectors of sub-terahertz radiation based on two-dimensional electron system. Altogether that represents our patent-protected  terahertz technology based on GaAs semiconductors in combination with HEMT (high-electron-mobility transistor) as imaging data transfer technique.

Of course, over the years of continuous improvement the system has survived quite a few updates, which is typical of many manufactures.  As a result there are two configurations we offer now to our customers.

THz scanner with Type I  THz optics (cylindrical PTFE lens) that is also referred to as the first  generation and  Imaging  scanner with Type II  THz optics including reflective mirror. which is considered to be an enhance version. Nevertheless the key system parameters remained unchanged as listed below and there are quite compelling and solid arguments  supporting such approach.

Image acquisition rate:  up to 5000 lines per second 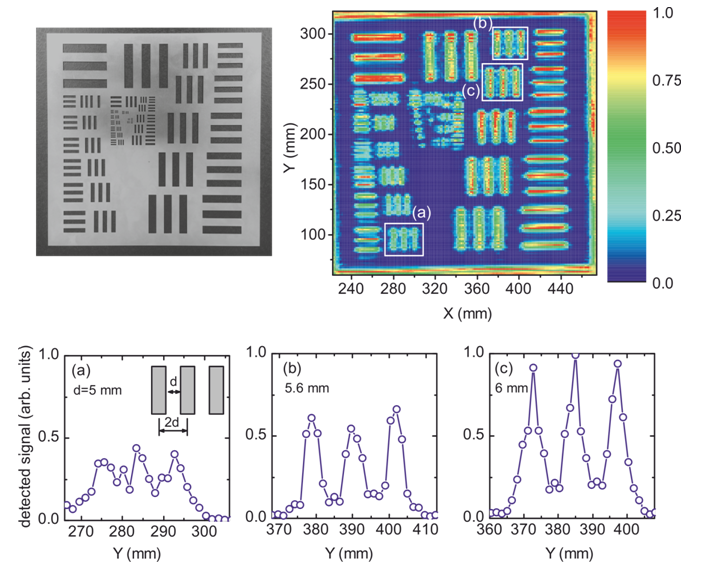 Imaging resolution capability is indisputably one of the key characteristics of any scanner and we would like to elaborate a bit on this particular aspect, because it’s critically important for many of our customers.  Imaging resolution in our case is determined not only by the pixel size, but also by the wave length, which is  3mm at 100 GHz. In other words, our pixels appear to be commensurate in size with the wave length (λ), that represents one of fundamental physical limits. Therefore –speaking of our 100 GHz scanner system - there is no sense in reducing the pixel size, because the wave length and the related diffraction limit is the key determinant of the attainable resolution.

Consequently, all our THz imaging cameras and scanners operating at the frequency of 100 GHz are good for detection of internal defects and anomalies that are 3mm in size or larger.

With all that in mind, there is one more crucial aspect to be emphasized about our 100 GHz scanner system. It is built to operate in the near field, which basically means that a target object (sample) needs to be kept as close to the  scanner sensor, as possible. As the distance between the scanner sensor array and the sample being scanned  increases, the imaging resolution degrades and the resultant THz images become more ‘blurred’.  The comparative picture below vividly shows this dependence between the distance to the scanner and the image resolution. This is the reason why we strongly recommend to install our THz scanner right under the conveyor belt, while the target objects are to be placed on the belt itself, to ensure successful imaging process. 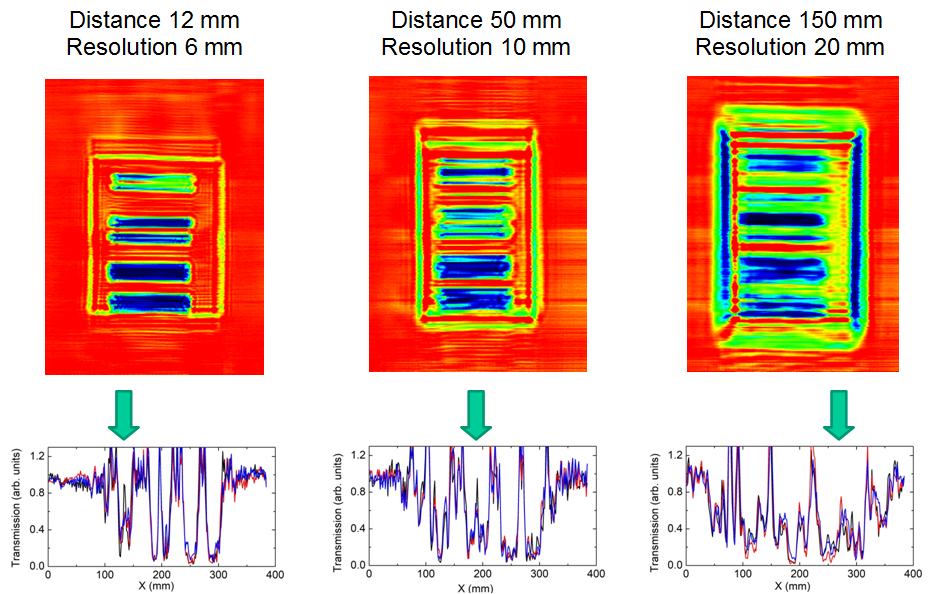