View from IRMMW-THz: Power in variety

Although perspectives in imaging and spectroscopy are often mentioned as being the most important applications and drivers for research in terahertz science, another highly promising topic is THz wireless communications. This was one of the messages to arise from the 40th International Conference on Infrared, Millimeter, and Terahertz Waves (IRMMW-THz), held over 23–28 August at the Chinese University of Hong Kong.

The increasing demand for higher-speed data rates in wireless communications means that carrier waves with much higher frequencies will need to be employed. Indeed, to meet expectations that data rates will need to fit into 100 Gbits within ten years may well need a carrier frequency above 275 GHz.

“We now have many enabling technologies thanks to the recent progress of semiconductor devices and integrated circuits operating at THz frequencies,” Nagatsuma of Osaka University told Nature Photonics. “In addition to the data rate, other expected advantages of THz communications over microwave communications are low power consumption and smaller transceiver size, particularly coming from a reduction in the antenna size,” he added. 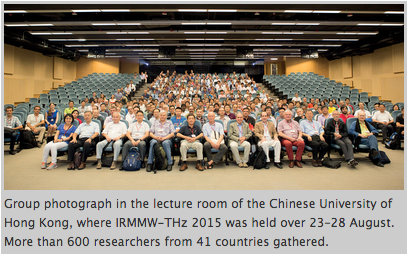 He says that scientists are turning to the development of photonic, rather than electronic, devices for THz communications because it is easier to get higher data rates using photonic components. “In addition, photonics-based systems might be deployed in the future convergence of fibre optic and wireless communications networks,” commented Nagatsuma. He thinks that ultrawideband amplifiers and antennas are the most important components requested to make full use of the bandwidth. “Even for photonics-based systems, amplifiers are necessary to boost the output power in the transmitter and to increase the sensitivity in the receiver,” he stressed.

Guillermo Carpintero of Universidad Carlos III de Madrid in Spain how he's challenging this and developed integrated photonics-based sources of mm and THz waves. “Although we tried to use available generic integration-platform building blocks, there is no building block for Bragg mirrors,” said Carpintero. As a result, the team came to the concept of integrated multimode interference reflector mirrors for mode-locked lasers. The optical spectrum of the optical heterodyne source based on the mode-locked photonic integrated circuit around 1.560 nm showed a carrier wave frequency of 90 GHz. This on-chip optical heterodyne source was used to perform broadband wireless data transmission.

Rupert Huber of the University of Regensburg reported about research run by sub-cycle THz pulses. The first half of his speech was devoted to the study of excitons in monolayer metal dichalcogenides — a class of 2D materials that is currently getting a high level of interest. Unlike the well-known graphene, single atomic layers of transition metal dichalcogenides feature direct energy gaps in the optical range, which makes them favorable for developing thin optoelectronic devices. The optical properties of this material are depressed by excitons whose behaviour and dynamics have been difficult to untangle. Huber’s research used ultrashort, ultrabroadband THz pulses to probe the atom-like internal Lyman transition between the 1s and 2p orbitals of the excitons and to directly measure the transition energy, oscillator power, density and dynamics. However, the THz response of a photoexcited exciton sheet in a single atomic layer is exceptionally weak. So, Huber's team had to increase the sensitivity of their THz detectors to determine tiny signal changes.

The ultrabroadband THz pulses unfolded important details about the 1s–2p resonance, including accurate transition energies, oscillator strengths, densities and linewidths. The THz probes are sensitive to all 1s excitons, regardless of their momentum, making it possible to draw a exhaustive picture of the exciton dynamics. Surprisingly, the observed decay dynamics indicate an ultrafast radiative annihilation of small-momentum excitons within 150 fs, whereas Auger recombination predominates for optically dark states. “The results also suggest internal exciton transitions as a new degree of freedom for quantum control, optoelectronics and valleytronics of dichalcogenide monolayers,” explained Huber.

Another half of Huber’s speech was dedicated to high-harmonic (HH) generation from a bulk GaSe crystal subjected to intense THz pulses. The latest discovery of HH generation in solids reassured for the development of compact solid-state attosecond sources and lightwave-driven electronics. Huber has been studying THz HH generation in the time domain with sub-cycle temporal resolution to explore the microscopic electron dynamics involved. The low carrier frequency of THz pulses offers the possibility to attain specifically large ponderomotive energies, which should open a way to push the HH cut-off frequency to new hights.

Professor Frank Hegmann of the University of Alberta in Canada talked about imaging ultrafast dynamics of a single InAs nanodot on GaAs with THz scanning tunnelling microscopy (STM). In THz STM, free-space-propagating THz pulses with picosecond duration are antenna-coupled to the tip of a scanning tunnelling microscope, producing a transient rectified tunnel current signal that depends on the shape of the current–voltage (I–V) curve of the tunnel junction. Excitations of the sample may influence local electric fields and the local density of states, which can modify the I–V response. The THz-STM, which is sensitive to the local I–V response of the tunnel junction, can provide information on the transient dynamics of excitations on surfaces with 0.5 ps time resolution and 2 nm spatial resolution.

Hegmann is now working on upgrading the system. “We are currently developing THz STM for operation in ultrahigh vacuum with the goal of imaging ultrafast dynamics on surfaces with atomic resolution,” he mentioned. The factors that restrain the spatial resolution of THz STM are alike in nature to those for conventional STM, such as tip quality. However, high-THz fields may produce tunnel currents over a larger area from the tip, which further limits spatial resolution. The temporal resolution of THz STM is restricted primarily by the duration of the THz pulse itself, but is also influenced by the nature of the antenna coupling to the compound (tip material and geometry, and THz incident angle). Eventually, the temporal resolution is restricted by the tunnel time, which can be fast (~1 fs).

As the absorption coefficient of THz waves in water is millions of times higher than that for visible light, water is usually observed as a inconvenience in THz spectroscopy. However, Martina Havenith of Ruhr-University of Bochum stressed on the importance of THz absorption spectroscopy in water.

“The majority of chemical reactions and virtually all biological processes take place in a liquid-state environment,” she explained to the audience. She admitted that THz absorption spectroscopy does have some benefits. First of all, terahertz waves cover the low-frequency modes of water, which are related with collective modes. Therefore they can directly probe the collective hydrogen bond network dynamics. Secondly, terahertz waves are sensitive to the picosecond motions connected with opening and closing of hydrogen bonds. Thirdly, the THz spectrum of a protein is sensitive to mutation and relies on the surface charge and flexibility of the protein.

She used a p-type Ge laser with a high average power to perform THz absorption spectroscopy in water layers 50–100 ?m thick. She admits that during the experiments it is essential to keep the humidity around the sample cell less than 10% and the temperature in the sample cell fixed within ±0.5 °C. As a result, a precision of less than 0.2% was achieved for the difference in THz absorption coefficient. The THz absorption spectroscopy results supported her theoretical hypothesis that proteins effect not only single water molecules at the protein surface but also the hydration dynamics in their surroundings up to a distance of 10–15 Å, that is, 3–5 hydration shells. “We pioneered kinetic THz absorption during enzymatic catalysis. A gradient of water motions towards functional sites of proteins (recognition sites) is observed — the so-called hydration funnel,” she explained.

Matthew Swithenbank of the University of Leeds in the UK is also researching THz spectroscopy in water, but with different approach — using on-chip THz time-domain spectroscopy. The technology combines a microfluidic channel and a planar Goubau line (PGL) that is formed by a single rectangular-shaped conducting wire lying on a flat dielectric substrate. However, it was a far from easy task, because microfluidic channels introduce impedance-mismatched interfaces at locations where the channel crossed the transmission line. These interfaces generated THz-frequency reflections in the time-domain, which at best complicated, and at worst prevented, subsequent analysis.

To avoid this problem, he produced a PGL on a 50-?m-thick polyimide film and positioned a microfluidic channel on the underside of the film for through-substrate measurement of liquid samples. This allowed full coverage of the transmission line sensing region (thereby eliminating time-domain reflections). He demonstrated that this technique was sufficiently sensitive to distinguish easily between alcohols in a homologous series that differed only by a single CH2 group. “We are now poised to explore a range of solvent-based biochemical systems,” he told Nature Photonics.

The next IRMMW-THz will be held in Copenhagen, Denmark over 26–30 September 2016.