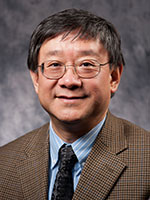 The Committee is pleased to announce the winner of the 2014 Kenneth J. Button Prize: Professor Xi-Cheng Zhang from University of Rochester, who is awarded the prize "for outstanding contributions to the development of THz time-domain spectroscopy and applications."

Dr. Zhang received 28 US patents; authored and co-authored 23 books and book chapters, 300 refereed papers; delivered 400 colloquium, seminars, invited conference presentations, and 200 contributed conference talks. His H-index = 70 (h-index is the largest number h such that h publications have at least h citations.) and i10-index=328 (i10-index is the number of publications with at least 10 citations); total citations greater than 24,400 (Google Scholar on 3/24/2014).

Zhang is currently the Parker Givens Chair of Optics at the University of Rochester, and the director of the Institute of Optics. He is also the Chairman of the Board and President of Zomega Terahertz Corporation.

Previously he was the J. Erik Jonsson ’22 Professor of Science at Rensselaer Polytechnic Institute, where he had joint appointments in the Department of Physics, Applied Physics and Astronomy, and the Department of Electrical Computer, and System Engineering. He also served as the director of the Center for Terahertz Research.