THz imaging systems are gaining popularity with the experts in various industries, including Agriculture.  It stands to reason, as there are certain problems, which conventional approaches based on infrared, visual, and X-ray inspection methods cannot solve, at least without tangible detriment to human health. This is exactly where Terasense THz imagers come in!

Determination of quantity and quality of nuts contained inside of nutshell is just one of the problems as applied to agriculture, which Terahertz imaging systems can effectively solve. Visual inspection fails to identify the number of nuts inside nutshell. Terahertz image of a peanut in a nutshell clearly shows a discernible defect – a missing nuts in the left part.

THz cameras allow to identify carcinogenic Mycotoxin fungus contaminating peanuts, corn,  other grain-crops and oil-plants. In particular, with the aid of THz imagers one can detect under the nutshell the signs of such nut infections as  Aspergillus flavus and Aspergillus parasiticus, which exude an extremely dangerous carcinogen Aflatoxins B1.

As an illustration of that capability  to the right there is a terahertz image of hazelnuts inside their nutshell. THz image was taken in transmission mode. Red color designates 100% THz transmission, green – 50%, blue 20%) at the frequency 100GHz.  Terahertz picture clearly shows a discernible defect - one of the nuts is missing. 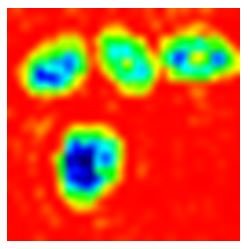 Quite often agricultural processing facility face a problem of separating stones, sticks, mud clots and other contaminants from the crops proper. However, visual inspection equipment fails to ensure the adequate level of checking/verification due to the inherently low color contrast.

Here is a terahertz image showing THz transmission in haricot bean (the upper three items in line) and a stone (a single object in the lower part) – all fairly equal in size. We can see that stones have much higher absorption in THz frequency range. This property of THz light makes contaminants  clearly distinguishable on THz image.

TeraSense is currently involved in the projects for developing equipment meant for terahertz-based qualification of grain-crops   seeds  (wheat, rye, rice, oats, barley, corn) and oil-plants (sunflower, soya bean,  peanuts, colza). Potential list of the tasks, which terahertz imaging devices can effectively handle includes, but is not limited to (1) - Detection of seed availability and determination of seed structure inside a plant’s pericarp, in particular, visualization of a sugar beat seed structure; (2) - Acidity estimation of sunflower seeds; identification of sunflower seeds infected with   sclerotium fungus; (3) -   Separation of hulled from unhulled oats.