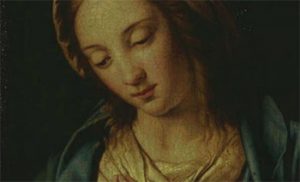 Innovative imaging techniques are getting more and more involved in unlocking various cultural secrets of the past as they help peeping into what’s been hidden for centuries. Of course, terahertz imaging technology with it gentle touch, void of harmful ionizing radiation, is effectively used for the purposes non-destructive evaluation of various antique paintings and other objects of art.

Research group headed by Prof. Dr. David Citrin at the Georgia Institute of Technology used fast THz scanners to examine a few works of art of the Renaissance and the 17th and 18th centuries. Terahertz imaging is known for its unique capability to see through the substance, and scientists at GTT used it to penetrate layers of paint one by one and see what’s underneath. This enabled them to uncover how each masterpiece was created by the artist many years ago, including the very first stages of canvas preparation, application of undercoat etc. This imaging technique is based on THz reflectometry that not only offered a wide palette of capabilities in exploring each phase in creating an piece of art, but also yielded an unprecedented level of details for such non-destructive examination.

The significance of such reflectometry-based THz imaging technology is hard to overestimate. It  holds immense potential for connoisseurs of art, indeed, in helping them authenticate ancient works and uncover counterfeits , as well as in exposing previous restorations, identifying potential damage and a lot more that is yet to be discovered. 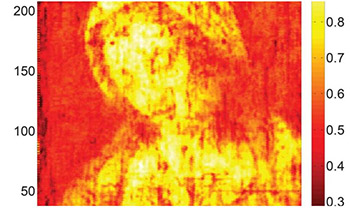 Dr. Alexandre Locquet a member of the researcher group and adjunct professor of the Georgia Tech's School of Electrical and Computer Engineering briefly explained what they used for the experiment, how their THz technique worked  and how such high imaging resolution was achieved to help conservators and historians to access in depth information about painting.

They chose ‘Madonna in Preghiera’ attributed to Giovanni Battista Salvi da Sassoferrato’s workshop provided as the courtesy of Musée de la Cour d'Or, Metz Métropole, Francem as their prime object of study.  Researchers scanned every 200 microns of the painting surface by means of pulse-based THz scanner. Similar to commercially available terahertz imaging scanners offered by Terasense, their system included two major elements: A) a sensor array sensitive in respective THz spectrum and (B) a terahertz generator emitting THz waves. However their THz imaging scanner system was built to operate in reflection mode/setup geometry with both sensor array and THz emitter placed on one side of the canvass.

Alexandre Locquet, who also happens to be a researcher at Metz-based Georgia Tech-CNRS lab in France, explained that THz rays back-scattered from the surface of each layer of pigment and thereby delivered valuable pieces of information onto the sensor array, while the whole sensor module moved across the painting in a raster pattern. However it was their unique terahertz signal processing method (and software) described as sparsity-based time-domain deconvolution that was the key to success in delivering such astounding results. Their data-processing algorithm enabled ‘deciphering’ signals reflected from each layers consecutively and building a 3D THz image, which is known as stratigraphy.  Prof.  David Citrin made a comparison of such technique to the one used in seismology to identify different strata of rock. Instead of acoustic signal used in seismology, this  imaging technique used a pulse of THz  radiation at a frequency of around 1 THz and then simply measured the returned signals reflected from various layers of pigments.

Without that advance signal processing the imaging capacities are limited to identification of only those  layers which are 100 to 150 microns thick, while using that algorithm allows to distinguish layers just 20 microns thick.  This is  significant, because for years people have tried using  raw data, while 'you really can't see much in that without processing the signals, Prof Citrin said. ‘It takes coupling the terahertz signals with the signal processing to really make a difference’.

Researchers also revealed one interesting peculiarity about paintings created before the 17th century. Their paint layers tend to be thinner, which posed certain challenges for their study.  Well, we hope using TeraSense THz imaging systems  will open new horizons for the scientists and artists alike.