A collaboration between US and Japanese scientists, have developed a major component thus to enable wireless communications which operate up to 100x faster than the latest generation routers. Current wireless communications operate at microwave frequencies, however as the demand for faster speeds and larger bandwidths increases, researchers are looking for ways to alleviate the communication bottleneck. Between the microwave and infrared part of the electromagnetic spectrum lies a prospective candidate: Terahertz (THz) radiation.

Oscillating at around 10^12 times per second, THz waves were previously utilized for the wireless data transmission world record, whereby a team of researchers reported local data transmission could be up to 100 GBit/s. However, for any real world system, electronic components are required which perform common functions akin to our regular communication technology; such as transmission, multiplexing, demultiplexing, detection, processing etc.

Any high-bandwidth communications technology requires the possibility to multiplex (combine multiple signals together and transmit over one medium) and demultiplex signals (separate out the multiple independent data streams for further processing) – see image below. This technology permits the transfer of the masses of data around the internet, TV, etc. whereby a vast number of data channels are carried over a single optical fiber, wirelessly or copper cable.

However, multiplexing and demultiplexing of the much faster THz signals remains a challenge; despite the importance of such capabilities for broadband networks.

The device is a modification of a common type of antenna designed to operate at THz frequencies.  Termed a “Leaky wave antenna” (shown in figure below), the device is produced from two parallel metal plates, forming a waveguide. One of the plates has a small slit in it and as the terahertz waves travel down the waveguide, some of the radiation leaks out. The angle the radiation leaks out is dependent on its frequency, hence 10 different frequencies will radiate at 10 different angles (demultiplexing) and by reversing the process the device can multiplex.  A device operating to multiplex/demultiplex between directional free-space beams and a single-mode waveguide is extremely appealing for real-world communication applications. 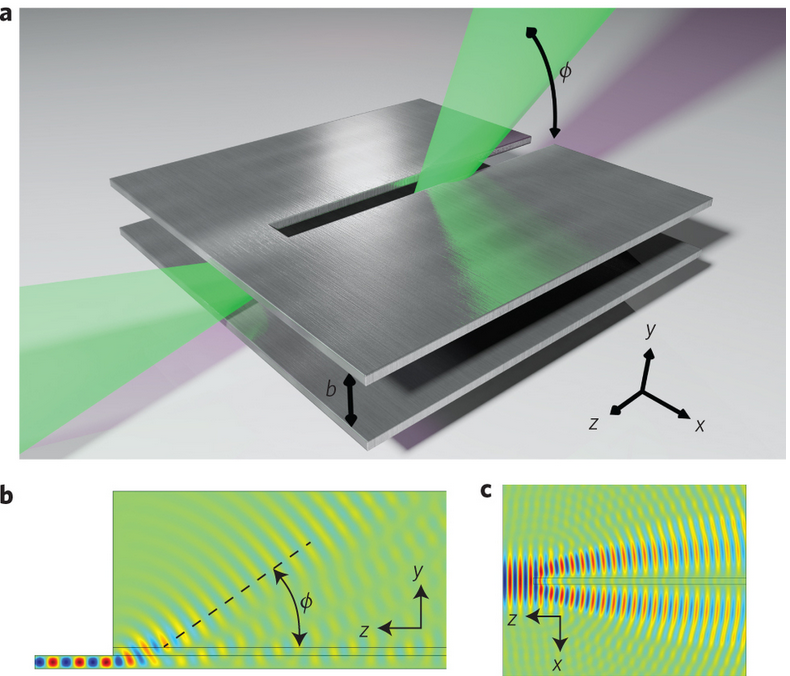 Moreover, one of the advantages to such approach, the scientists say, is that by adjusting the distance between the plates, it’s possible to adjust the spectrum bandwidth that can be allocated to each channel and thus offers a unique method for controlling the spectrum allocation, by variation of the waveguide plate separation. Some of the methods of operation are outlined in the figure below.

The team hope that his early prototype device will start greater research into next generation THz wireless communication networks.

This research is potentially an exciting development, however there is a mixture of evidence to suggest whether the interaction of THz radiation with biological organisms is safe. A theoretical study published by MIT in 2009 suggested that terahertz waves may interfere with DNA via non-linear instabilities, however the process  was extremely unlikely and required long exposure to the radiation. Until sufficient experimental biological data is gathered, one cannot be entirely certain as to the mechanisms involved, however the consensus thus far because THz radiation is non-ionizing is that damage to humans is extremely unlikely.