Looking deeper in what terahertz (THz) is

Some of our industrial customers seeking imaging solutions for  applications do not deal with solid state physics or semiconductors on a daily basis and may not be familiar with technicalities of our innovative THz imaging technology. Sometimes this makes people exercise extra caution in dealing with our THz systems and we feel it would be useful here to quickly refresh the basics of what 'terahertz' really is .

The first meaning that comes to mind when speaking of Terahertz (THz) is a unit of measure of frequency that is equal to 1 trillion hertz (1012 Hz). It is this why terahertz waves are sometimes also referred to as Tremendously High Frequency (THF), while other known names are T-rays, T-waves, sub-millimeter radiation, T-light, T-lux. It usually relates to the frequency of an electromagnetic wave, which is a part of the electromagnetic spectrum invisible to the naked eye that lies in between the microwave (MW) and the infrared (IR) range. THz waves are an example of a specific part of the electromagnetic spectrum within band ranging from 0.3 to 3 THz as was designated by the International Telecommunication Union (ITU).

It is worth while pointing out here  that TeraSense imagers employ only a part of THz frequency spectrum between 50 GHz (which actually falls into sub-THz region) and 0.7 THz i.e. the lower terahertz range.

Very often Terahertz frequency radiation is called a ‘terahertz gap’, because compared to the adjacent microwave and infrared spectra that are used extensively, T-rays technology is relatively young and therefore is not so popular. At such frequencies the electromagnetic radiation becomes too high or too thin to be digitally measured using electronic counters, and so it must be measured in proxy through the use of the properties of wavelength and energy. THz  imaging cameras operate based on measuring the intensity of THz waves reaching the sensor array after penetrating the target materials, which allows to detect/visualize hidden defects/objects. The generation and modulation of electromagnetic signals in this range are also very hard to do with conventional electronic devices used in generating radio waves and microwaves. All that requires further research, which  Terasense among other leading manufactures in the industry  conducts on continuous basis. 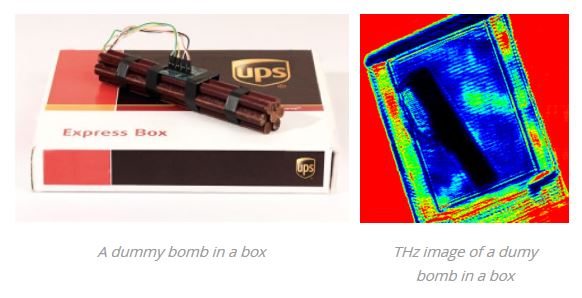 Of course it is the unique property of T-rays to harmlessly penetrate many common materials that attracts many researches and industrialists and offers boundless capabilities in many areas. Slowly but surely terahertz waves are finding their utility in many industrial fields. Recently an increasingly growing interest is observed for THz imaging technology relative to medical diagnostics, food, agricultural and hygiene products, pharmaceutical and cosmetics items and other areas, where human health is of utmost importance and where X-rays are not desirable or even acceptable due to ionizing radiation.

Security screening applications  and Non-destructive testing (NDT) appear to take the lead among the modern trends aimed at realizing great potential that our THz technology. THz imaging can be successful used, for instance, in mail and parcel screening for hidden threats, for pest control and other types of inspections required in wood processing industry, quality control in ceramic industry and automotive industry and many other fields, including  telecommunication and astronomy.

Of course, as any other technology T-ray imaging has certain peculiarities, advantage  and limitations. For instance, Terahertz radiation has a hard time penetrating fog and clouds and cannot penetrate liquid water or metal, which makes its use quite limited to indoor, fairly clean and dry environments.  Besides, THz images are no match for X-ray images that boast sharp outlines and high penetration capabilities.  However, T-rays do not produce any ionizing radiation and are absolutely harmless for humans, which beats certain disadvantages.

Even though X-ray machines can offer a better imaging resolution, they are still rather expensive despite their long-time dominance in the market.  On top of that, X-rays are known to work very poorly with polymers and hollows in polymers. X-ray simply fails to detect them. Likewise X-rays perform poorly with ceramics, as it shoots though it and detects nothing (creating no image); so a ceramic knife can be entirely invisible to X-ray machine.

As any other innovative technology, THz imaging has certain areas for development and Terasense is certainly determined to lead the way to perfection. We invite everyone to join our club before we have grown up and become mature player  saturating  the world THz market.